For Pack meeting in June the boys learned about fire. We had a fire fighter come and talk about fire safety and then learned about the different ways to build fires. After the discussion and lessons each boy was able to make their own fire. I know, I was a bit nervous at first but the boys did a great job. No one was hurt and they had a blast. 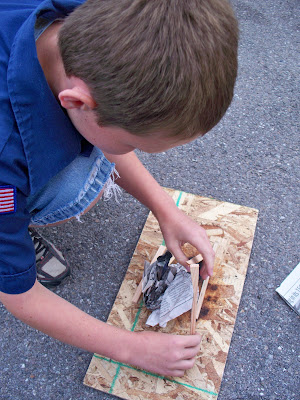 Here is Zach building his fire. 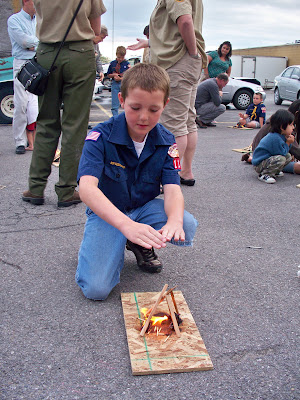 Once we got it started, he was enjoying the warmth of it.
Zach earned his Wolf (finishing up the last requirements on his birthday) and recieved his award that night. He was so cute. He is becoming so mature if you will...well, he's just growing up. He is a great boy. I love this photo of him reciting the Boy Scout Motto. He didn't know I was taking the photo. I think this is one I will cherish. Don't ask why...I just like it. 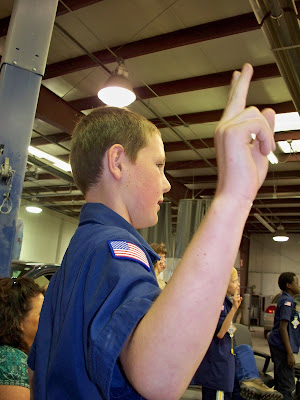 One of the perks of the boys advancing is that when they do, the mom's are rewarded also with a mother's pin. I know that I don't always have a great attitude about scouting, (which I am trying to work on), but I love that the boys achieve what they set out to do. It makes me happy when it all pays off. 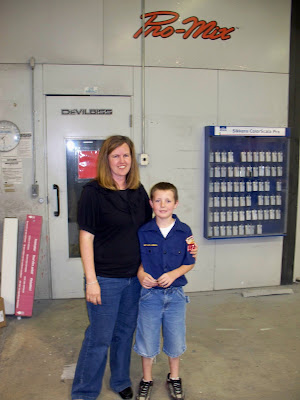 Here we are just after Zach pinned my mother's pin on me. I have to give credit where credit is due...I promised I would note that Brian Bullock took the photo. Thanks Brian!

(I don't like going up and getting a pin to be honest. I feel like such a hypocrite because I'm such a crappy scout mom.)