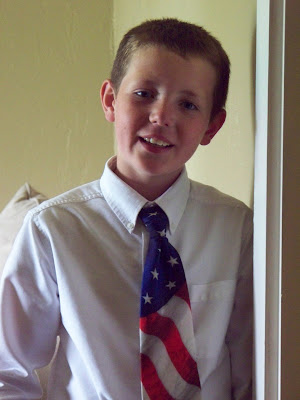 Zach the day before his 9th b-day! Isn't he cute!

Zach had a birthday last week. He turned nine! Zach is such a funny boy, not a day goes by that he doesn't catch me off guard and says something to crack me up. He is very sensitive, loving & active. This year his b-day was pretty low key, which was nice. He had to finish off his last requirement for his Wolf badge which was planning out and helping with meals for a day...so he got to choose everything we ate on his b-day. He helped and finished his Wolf just in time! He chose his favorites like Chocolate Chip Waffles & bacon for breakfast, Grilled Cheese sandwiches & Chips for lunch & Meatballs and Rice for dinner. 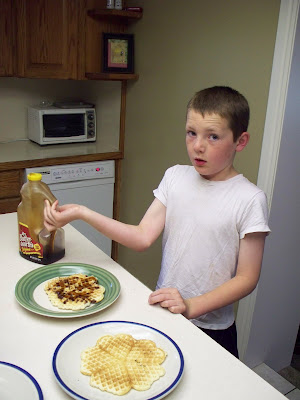 Zach covering he already sweet chocolate chip waffle with maple syrup....YUM!
He got a visit from Grammy & Papa & a phone call from Grandma. He had a fun day! All he wanted for his birthday was a rip stick. He asked everyone to help with his rip stick fund! Well, after all was said and done he was able to go to Walmart 2 days after his big day and pick it up! He was so excited I couldn't believe it. After we bought it and were on our way home he was holding it in the back seat and I hear him say...

"SHE'S MY LADY, AND I PUT ALL MY WEIGHT ON HER"
(a quote from the movie Surf's Up) 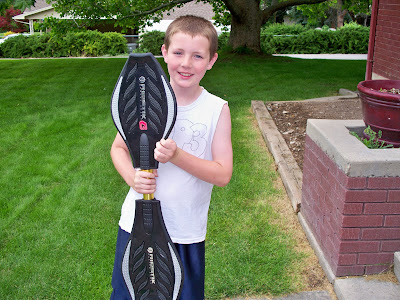 I started to laugh and couldn't stop. I wish I would have had my camera to take a photo of him in the car...he could hardly contain himself. By the time we got home he had it out of its package and riding it all over the driveway. He was in hog heaven. He has even been kind enough to let his brother and sister ride on it. Which they are pretty jealous...they want one also. 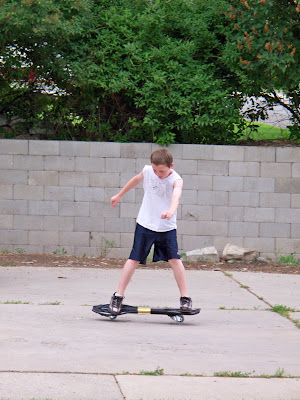 He rode like this for hours the first day he got it!

Zach asked for Mint Brownies instead of cake. After his game we sang Happy Birthday to him and he made a wish and blew out the candles. Well, me being a forgetful mom...I forgot to buy candles and all we had at home was a #3 candle. So we made do with that and he was a good sport about it. At least there was something to blow out. I need to be better about that. But over all he had a great day! 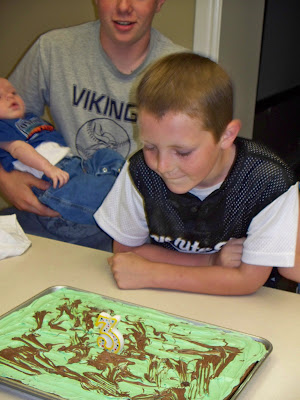 Zach with his mint brownies & #3 candle...like I said he is an easy going kid!

So Happy Ninth Birthday Zach!!! We love you very much! 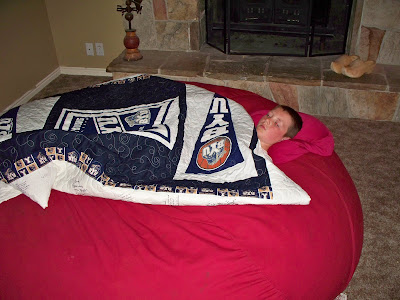 Zach sound asleep after a fun eventful birthday...all wrapped up in the the quilt Grammy made him. Love you Zach!

Posted by Craig and Cricket at 5:15 PM

happy birthday zach! that is so hilarious that he calls that his lady!
love your new background.

Happy Birthday to Zach!
I hope him and Sabrina meet when they are at BYU someday...;)!

I love how easy going and hilarious he is! He showed us his "lady" Saturday. So funny!