Tonight Caleb had his last game for the season. This game was a rain make-up game and it also was a pre-season game so it really didn't count in the standings. Caleb's team has done great!!! It was a rocky start but they really connected and their record is 7-1 (seven wins & one loss for those unfamiliar with baseball lingo). Great season. Last night at his game the coach told them because the game didn't count that they could play any position they wanted. So Caleb piped up and asked if he could pitch...his coach agreed. Caleb was pumped. He couldn't wait to get out there. 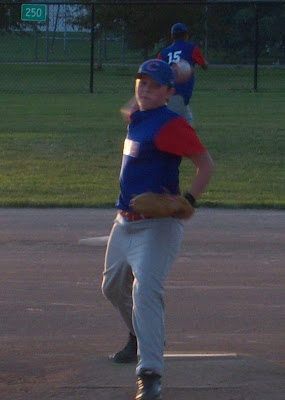 I had a Young Womens 5 mile hike tonight so I couldn't be there to watch him but Craig took some photos. Craig said that the warm up pitches were out of control! The coach told the umpire maybe he shouldn't stand behind the plate for fear of being hit. Batter up! Caleb came out...he struck out three of the four batters he faced! He loved it ... something other than catcher! He did a good job. He also played center field, short stop, and 3rd base. It was a great game! 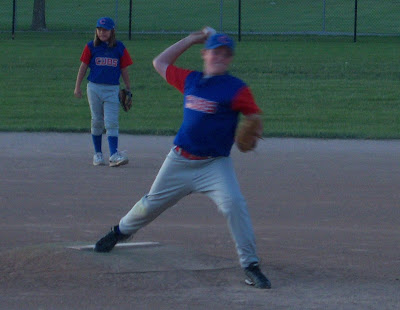 To bad the face is blurred! It looks like a good one!

In the last inning, Craig offered a deal. Five bucks for a hit over the outfield heads. So while he is stepping up to bat I arrive. He was ready to hit, he wanted it. He has one strike due to a foul, the second pitch he hit a line drive shot to right field, it bounced before the right fielder but rolled to the 250 foot fence. The crowd went wild!!! He rounded first, and kicked it into gear!!! I don't think he has ever run so hard or fast for that matter! As he rounded second, the outfielder was just getting to the ball, and as he rounded third heading for home the cut off man who was just outside of the infield caught and threw the ball home....We were going crazy!!!! The throw was dead on and Caleb slid right into the catcher knocking the ball out of his glove!!!! His first homerun ever!!! What made it better, was the bases had been loaded!!! GRAND SLAM! Way to go. I was watching him so closely I didn't even realize that there were base runners! Someone had to inform me it was a grand slam! The team cleared the dugout and the stands were cheering like mad! It was awesome. He was so excited and winded at the same time. I think he was looking for the oxygen mask! LOL! Craig is out five bucks but it was well worth it. Way to go Idaho! We were so happy for him! 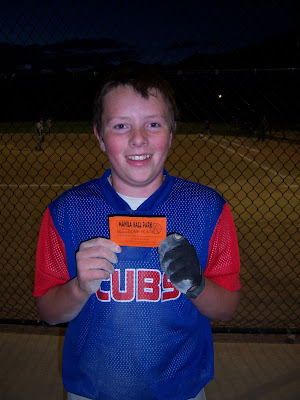 Check out how happy he is! He got a free drink at the snack shack! SCORE!

Posted by Craig and Cricket at 9:51 PM

way to go caleb!! that is so awesome---you'll remember that forever.

Congratulations. What a great last game!