Who Would Have Thought? 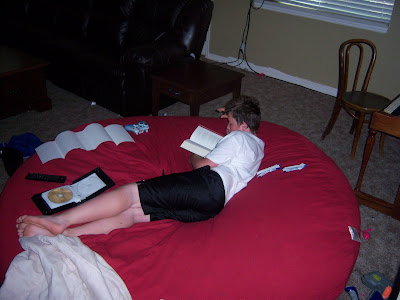 This was the position Caleb stayed in for almost 2 entire days. 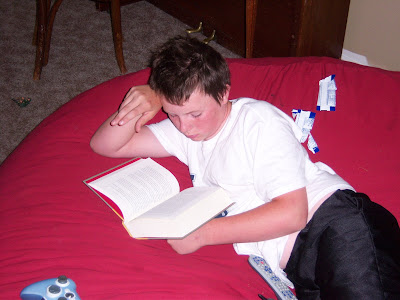 Notice the granola bar wrappers all over the bean bag, and the hair that he had been running his fingers thru, it was seriously funny to see him in the same place for so long.


I went to the library on Monday to see what I could find that would capture the idea of reading during the summer! My children feel that summer is their time off. I am trying to keep some sort of reading and school work going this summer for thier benefit. I found the Harry Potter #7 on CD for Caleb to listen to. I would have never thought it would turn out the way it did.


Caleb started listening Monday evening, but only got in a chapter. Tuesday he woke up early and the marathon began. He didn't move off the bean bag at all! It was crazy. He was in a trance. I not sure that he even knew what was going on around him. It was really funny.


Wednesday he woke up and started the disks first thing. Zach and Liberty were at times invloved in listening but at other times really getting sick of it. He read along with the book which was something that I encouraged and surprisingly he agreed.


The last few chapters everyone was in the family room listening to. Craig and I read the book right after it came out but we were still totally taken with listening to the words and the wonderful story. We are definite Harry Potter fans in this house.


I would have never thought my sneaky plan to have some sort of reading taking place this summer would have worked so great. I wonder what other books on tape I can find! We shall see!

Posted by Craig and Cricket at 7:46 PM