Are You Ready For Some Football??? 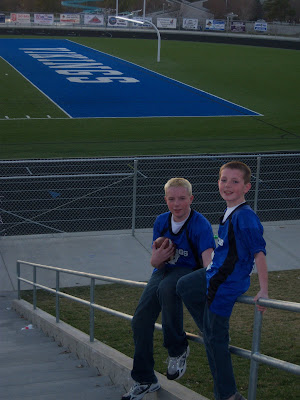 (This photo was taken last October...remember the bleached hair!!! But I haven't taken a photo of them yet this year. It amazes me how much they have changed in a year!!)

Well after weeks of practices the season has begun. It is so fun to go and watch my boys play football. Both boys are dedicated to it. They are good players. From now until late October if we aren't home that is where you will find us...either at practices or games. With both Caleb and Zach playing again this year we are very busy. Not to mention all the other things going on in our lives. So be ready for lots of photos and posts of games, big plays (we hope) and lots of wins (we hope). Caleb made the A team again this year, and Zach is playing for the 3rd grade team.

They are busy guys out on the field. I love it. This year we also have Coach Craig ...he is helping coach Caleb's team. It will be fun to watch him officially on the sidelines this year...every other year he has paced the sidelines yelling out to the boys. This year he will look cute in his coaches shirt and tag, and be yelling out to more than just our boys. He seems to be really enjoying it. Caleb comes home from practices telling things that Craig does, and Craig will show me his "tatoos" (red marks, bruises, etc.) from the boys tackling him.

So here's to another great season! Can't wait to see how it all plays out. GO VIKINGS!

Posted by Craig and Cricket at 9:19 AM