Stay-Cation's All I Ever Wanted!

Stay-Cation Day One
July 9, 2009 * Park City Mountain Resort
This is a long post!

The first day of our Stay-Cation we all ventured up to Park City to spend the day playing on the Alpine Slide, Alpine Coaster, Zip Line and all the other fun things there. We played really hard...and had a great day. When we first got there we were disappointed to hear that both the zip line and Alpine Coaster were closed. We all hoped that by the end of the day they would be opened. This was the first time being there for many of the family...I went there the first year I moved to Utah so it has been awhile.

Everyone hit the Alpine slide first and loved it. We all went down it many times through the day. We got word that the Zip Line had opened so Craig and I ran up and got into line with his parents. I will tell you that the anticipation of getting to the front of the line is crazy...I got nervous, excited, then nervous again. Let me describe this for those who aren't sure what it is...for both the Alpine Slide and the Zip Line you ride the ski lift up to a certain point and then to get down the mountain you ride these rides. So for the Zip Line you are up the mountain you get strapped into these little chairs and push your feet against this little door and after the worker radios down to the bottom and you hear "drop'em" as a response the door swings open and you are flying in your little chair that is hooked to a cable down the mountain. I screamed at the first initial plunge but after that it was great. Mainly because Craig was such a big talker that he was going to beat me down to the bottom...well let's just say that I SMOKED him! Here is a photo I found on google to show what you are sitting in...I didn't get a photo of me or Craig on it. 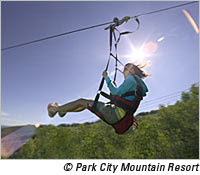 It was really fun...you seriously fly or "zip" down the mountain. So glad I got to do it because that was the only time I did all day...the lines got really long.

After the Zip Line we played around seriously it was a great day...after eating lunch and taking a break to check into our hotel (we stayed one night in a hotel) and taking the kids swimming we headed back for more fun. When we got back we heard that the Alpine Coaster was opened. So of course we ran up there. Okay, I was a bit stressed out about this cause all of my children were going on it. You sit in these...(again photo from Google) 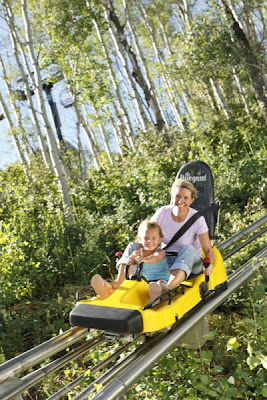 you have a little seat belt on...you can either ride single or double and you are hanging on for dear life. While in line I told Craig he had to take Liberty cause I was so nervous I didn't want her to feed off my nerves. So I went alone. You get all settled into your cart thing and you actually ride this up the mountain instead of the chair lift. It winds up the moutain and it is so pretty. Before I took off up the mountain the worker said to me...keep your seat belt on and don't brake or stop for anything and keep the stick (which controls your speed) pinned. The more I think about it I think he knew that I was nervous...because he told Craig something totally different. To keep it pinned means you are FLYING at top speed. I was scared for my life! I was whipping around these turns and bumps and seriously I was going so fast. Even Craig said that he (and he loves going fast) had to use his brakes around some of the turns. I got of shaking! Craig just laughed when I told him that I never broke and kept my stick pinned. I could have loosened up on the stick to go slower! HELLO! I was just listening to the worker kid, thanks alot! I made it down and wouldn't go on it again. Caleb, Zach and Liberty got off yelling "That was AWESOME!" They kept going on it over and over. So note to self...you don't have to listen so literally to the worker kid ever again! Our day was really fun we all got fried! But I think it was a great way to start our Stay-Cation. Check out the photos... 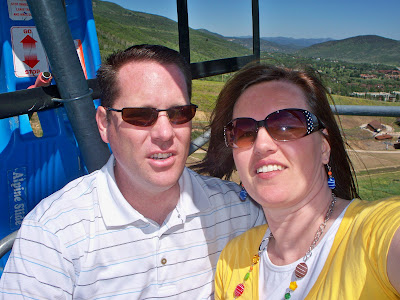 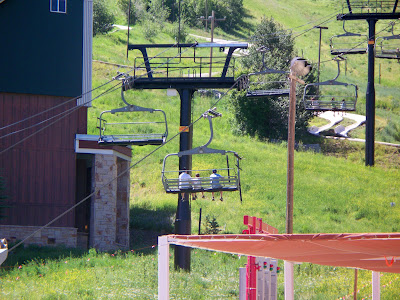 Craig and the boys heading up the mountain right when we got there...I think they were one of the first ones on. They didn't want to wait for Lib and I. 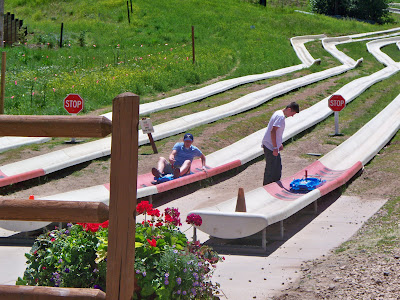 Caleb coming off his first ride...great fun. Christopher beat him this time but not all day long. 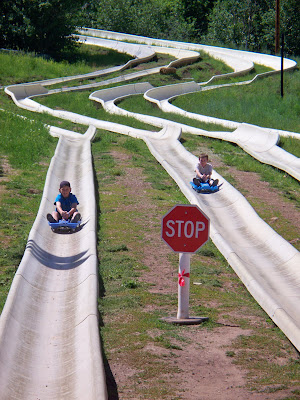 Hayden and Zach coming down the final stretch of the slide 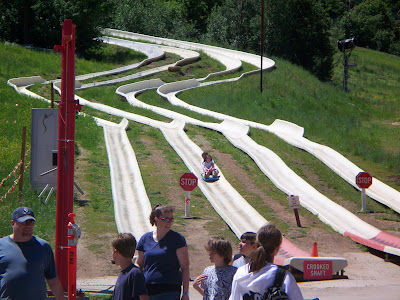 Here is Liberty and Grandma riding down together. 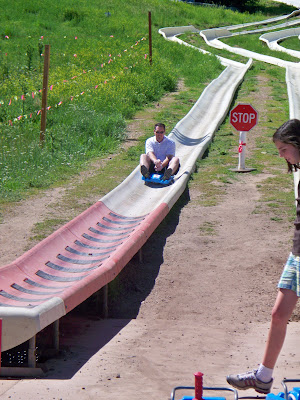 Craig went down and was surprised how long it was...as the day went on, he got going so fast it was crazy 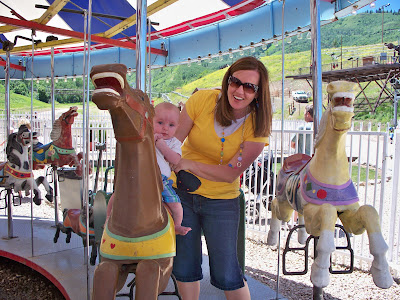 Brit's first carosel ride...he loved it. It was so nice they had little rides and mini golf and other smaller things for people to do. 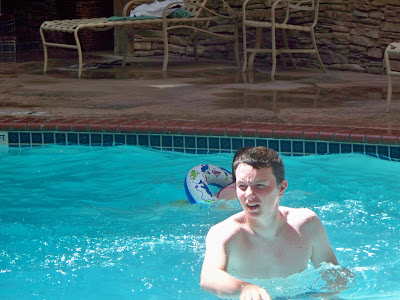 Caleb playing in the pool 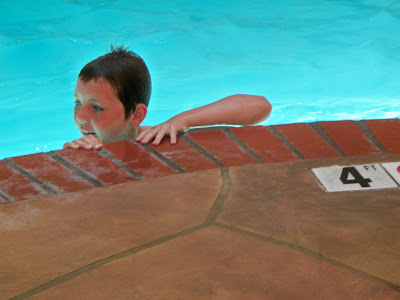 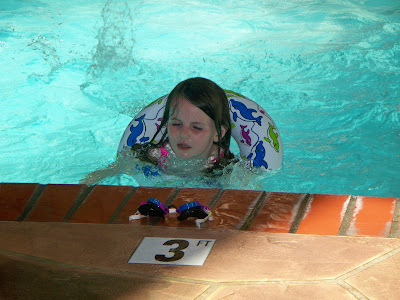 Liberty loved playing in the pool 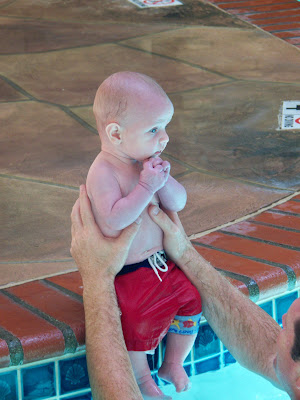 Brit just after taking his first swim ever...he loved it and only drank half of the water!!! 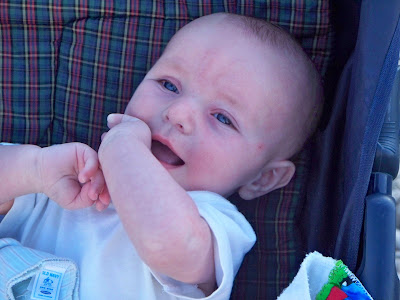 Back at Park City Mountain Resort...I couldn't believe what a trooper Brit was all day long being outside most of it and he was as happy as could be. That was so helpful. 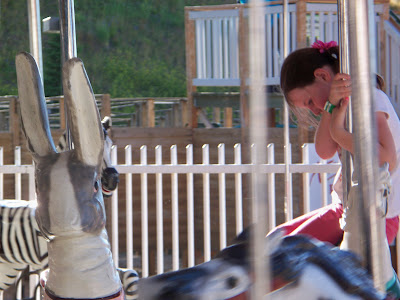 By the end of our day...Libery was riding the carousel and you can see that she was pretty tired...she rode the entire ride like this...she was totally in a trance. Kind of funny. 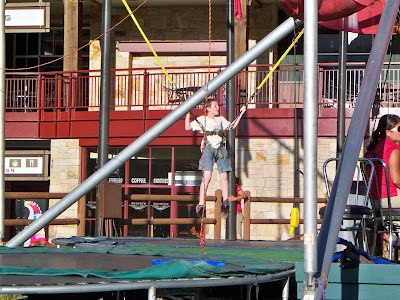 Zach taking his turn on the bungee/trampoline thing...he got to jump for 5 minutes and after he got off he was tired...he said his legs were hurting. Good work out I guess. 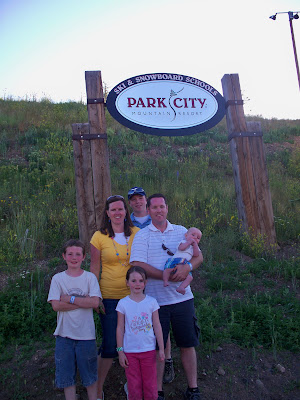 One last family photo just before leaving the resort. We all got so burnt but it was so much fun. The kids were asking when we could go back as we left. I guess that means they loved it.

So that sums up our first day...after leaving the resort we went out to pizza...very long story we walked and after ordering I was left with 3 teenagers, a 10 year old, a 6 year old and Brit...while the others went to get the cars. Caleb went to sprinkle some red pepper flakes on his pizza and the entire jar spilt on one piece...I wish I would have thought to take a photo cause we were all laughing...Lib was sitting right next to him and she ended up with a massive bloody
nose ...which almost made others at the table throw up cause they were grossed out. We laughed and laughed. Lots of other funny things happened that night but I will spare you the details, let's just say we'll keep them in the family. Great times. Day Two coming soon.

Posted by Craig and Cricket at 3:00 PM

That looks like so much fun. If we ever make it up to Utah, Park City is tops on our list. Sabrina saw the pictures and is totally begging to go on the Alpine Slide and Zip line...she totally digs that kind of stuff. Can't wait to see what you did for day 2!