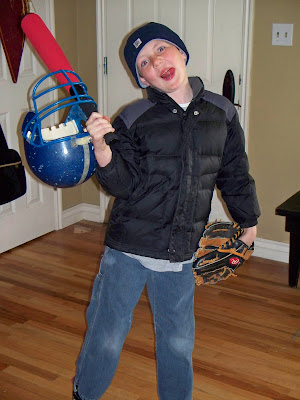 Zach getting ready to go!

This baseball season we decided to sign Zach up for Little League instead of playing in the competition league he played in last year. Craig's brother is coaching a team and we were trying to figure out a way to make sure Zach got on his team. Coaches are only able to secure their own child and the rest is all done by draft/tryout. So the plan was to send Zach dressed in normal clothes (not his normal baseball attire) and have him not give it his all so none of the other coaches would notice him. We talked it up, told him that for an hour he didn't have to play his best, just to lay low so he could be on the team with his cousin. Well, I don't know what happened cause I wasn't at the try out...but from what I understand, Zach turned on the show...he pitched fast balls, dove to catch pop flies, he was giving it his all! Not what we had hoped, at least not to get on the team we wanted. Well, apparently his uncle was trying to tell him to lay low and he just was having too much fun or something. Long story shortened...Zach was the first draft pick for his age group. That means he isn't on his uncles team...bummer! But I must say that in a way I have to laugh...he got out there and remembered how much he likes to play and had fun. So this year he won't be on a "family team" but he will do great. His coach said that when he rated the boys he gave them a score from 1 (being the lowest) to 5 (being the highest) that Zach got a 5 with a star next to it. So if anything I have to be excited for him this year, he will get a chance to pitch a lot, which I don't know if that would have been the case on another team, due to other pitchers. So we shall see what the season brings for him. I hope it is one he will enjoy.


I must explain the photo...as he was getting ready to go Caleb and I were telling him to act like a "non-athlete"... we joked about sending him wearing a football helmet and with a foam bat asking to play goalie. We were all getting a great laugh out of the situation. When he walked out the door I was thinking he would actually go through with it...I guess I was wrong.

Way to go Zach! He cracks me up!