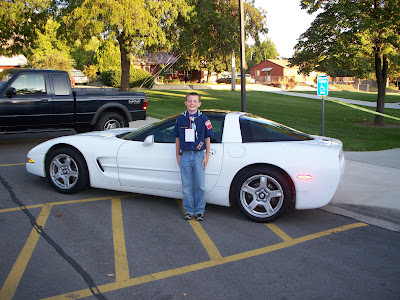 We knew it was going to be a fun night when we drove up to the church to see a shiny white Corvette parked in the parking lot. The Cub Master went all out to decorate the place and it was awesome. 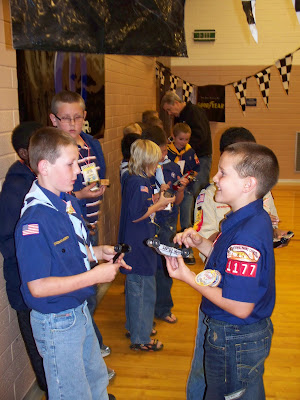 As the boys arrived they all had their photos taken with the car and then were handed a pit pass that had a number for their car on it. The boys were pumped and ready to race. I loved watching them cheer each other on and talk about how they made their cars. 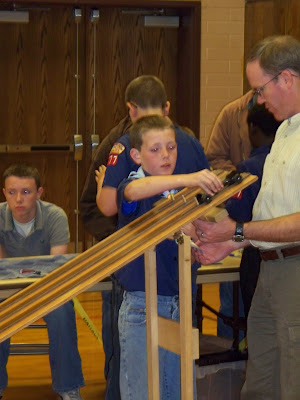 Here is Zach prepping his car for its first race...this is serious stuff! 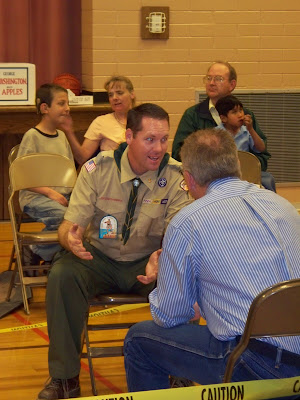 Craig was asked to be one of the track judges (you know the guys who decide who wins each race), so he was stuck in this position all night long. 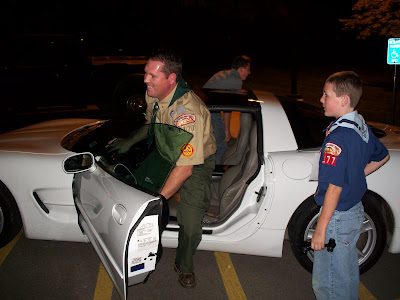 His reward along with the boys was a chance to drive the Corvette. It was so fun to watch how excited they all got about the power and doing donuts and fishtales and peeling out. I know my hubby sets a great example for his boys! I wonder what it will be like when they can drive. We'll just have to see! 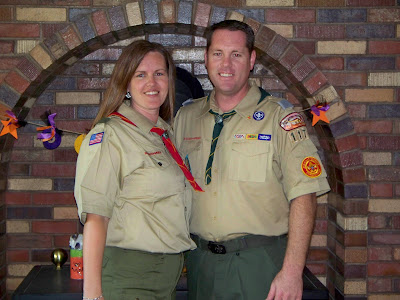 This was the first Pack Meeting that I wore my new Scout Uniform. I have to admit I NEVER thought that I would own a BOY SCOUT uniform. I am on the Scout Committee and we were asked to show up to Scouting events in a uniform to set a good example for the boys. I kind of laughed and thought, not a chance...but, the Scout store was having a sale to get rid of all the old style uniforms to make room for the new style. So, Craig and I ventured down and I got a uniform, pants and all for $18.00. That is the ONLY reason I got one. I would have NEVER paid full price. So Sorry! But I have to laugh when Craig and I got ready to go and we were twins...well, I don't have all the patches on mine yet but we had to take a photo. I must say that Scout pants aren't the most flattering...YUCK! I haven't seen a zipper that long on a pair of pants for years. They make me look like I am still prego! But oh well, I wear it only when I have to, and now I can set a good example for the boys.

So, is that picture of you two going on the Christmas cards this year? :)