Not What I Expected To See!

Well this morning once again we were running late! As I ran out the door to get into the truck, I back out to find this... 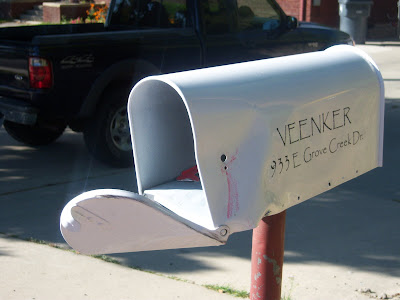 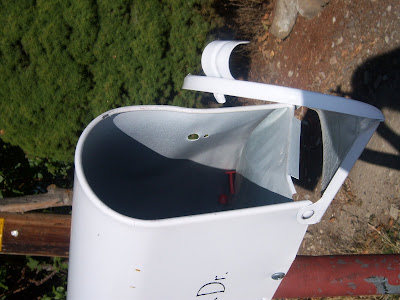 Sorry I forgot to change this phoot. But you get the jist of it!

You can't really tell this but the thing was hit so hard it knocked the screws out along the bottom. It was hit hard!

I will admit I was at first sort of mad and put out...but what could I do? What's done is done. I picked up all the pieces of the red flag which were spread over the street and our driveway. I got in my car and went to work. When I got there I called Craig to see if he had noticed anything, he hadn't. We only left like 45 minutes apart from each other, so it happened in that time...it was garbage day. I had figured it out. The garbage man/truck had hit the mail box. I called the garbage company and made my complaint to the receptionist and she transfered me to some other guy who waited for me to give my complaint and his reply was "oh you must be 933 East. He was waiting for us to call, the driver had lifted the can and dumped it but on the way down it hit the mailbox. He called it in right away. I just wondered why he didn't come knock on my door. But oh well. They are going to replace it and that is what I wanted. We just got the vinyl address and the mailbox this last summer.


I was relieved when I figured it wasn't some vandal hitting my house. I didn't want that. But still that isn't what I wanted to see walking out for school. Not the way I wanted to start my day!


Craig was able to bend it back a little bit so it doesn't look so horrible until we are able to get another one.

Posted by Craig and Cricket at 4:24 PM

What a total bummer!! I love how you have your name and address on the mailbox...looks so cute! Hope it gets fixed soon.