Christmas Eve at the Christensen's

This year we had the chance to go to 2 parties on Christmas Eve. Peterson party was held earlier in the afternoon, and that night we headed over to Christensen's house. Again, we ate wonderful food, I wish I would have taken a photo of all they goodness that was ours for the taking! DELICIOUS! After eating tons, Lori says okay, we are going to play the paper bag game. Now if you have never played this game, it is ALOT harder than you would think!
HOW TO PLAY:
Place a paper bag on the floor
Hands have to be behind your back & one foot off the ground
All players must pick up the paper bag with thier mouth
Everyone gets 3 tries, if you don't make it you are no longer playing
Once everyone has sucessfully picked it up, you cut a portion of the bag off
Sounds easy enough, but I promise...MUCH HARDER THAN YOU THINK!
This game tends to hurt more then next day then it does while playing! HA! HA!

The laughs are everywhere! All I could think about while playing was...I must look ridiculous!
Here's Libby's 1st try 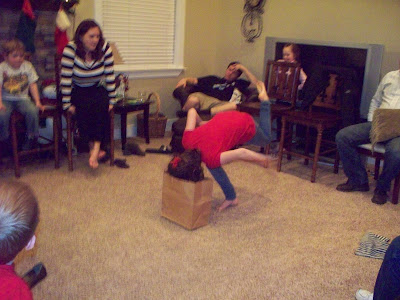 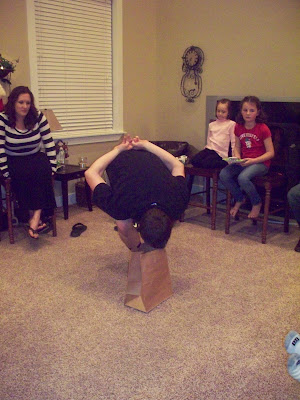 Craig's turn...this was taken after the first round...the bag is shorter 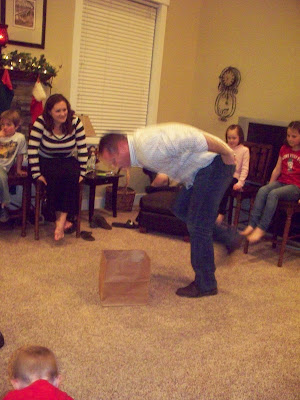 Zach in the first round... 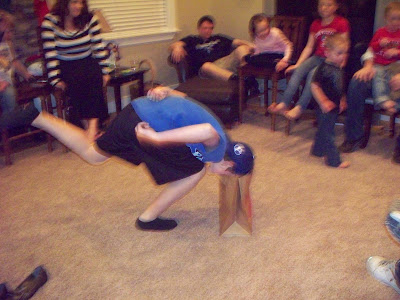 Me in all my loveliness in the 2nd round... 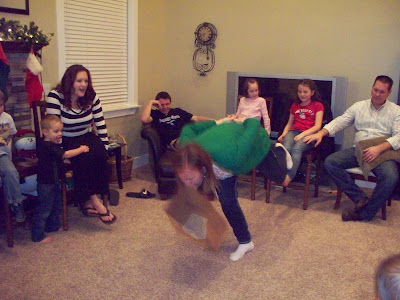 It is very funny to watch. We only made it a couple of rounds, we were all full from eating so much and the combination of the two wasn't working so great! If you can believe this I have seen this game played where only the bottom of the paper sack was left and people were still able to pick it up. CRAZY! Seriously, it is a very fun game, give it a try! But don't say I didn't warn you!

Randomly, I ended up winning the game! It came down to 4 people still in and we went ahead and picked numbers to see who won, it was my lucky day! I won the iTunes card! Funny thing is I don't even have an iPod! So my children were really nice to me and of course I let them use it!

One last shot from the 2nd floor of their house. Everyone there, playing Pictionary!
Thanks for a fun party Christensen's! 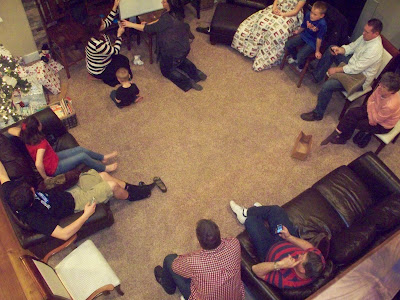