Just like every year Christmas and New Years came so quickly and is now past. Every year I stress myself out and then end up enjoying the season beyond belief. There is nothing better than spending time with family, eating all the yumminess that comes with the season, listening to Christmas music (and on occassion, singing them at the top of my lungs), having a break from school, and seeing the exciment and anticipation of the season. This year was TONS of fun! I must admit there were many simple traditions we didn't get to, because of schedules and meetings, but it was a great time of year for all of us! I took a ton of photos and after reviewing them I always think of other shots I wish I would have taken, but here's what I've got!
I warn you there are lots of photos!
*Christmas Eve @ Veenker Home* 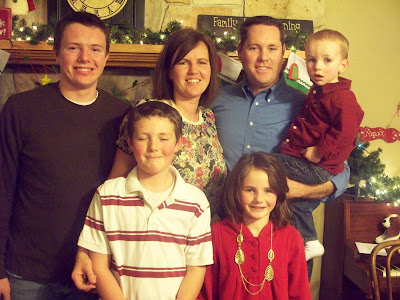 I wish I would have taken this photo before all of the festivities. We all look a little hashed, and I don't have a clue what Zach is doing, but here's our little family. 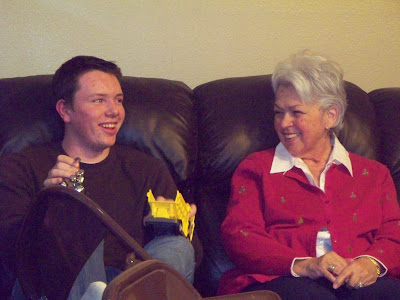 Caleb and Grammy, I don't know what was so funny. 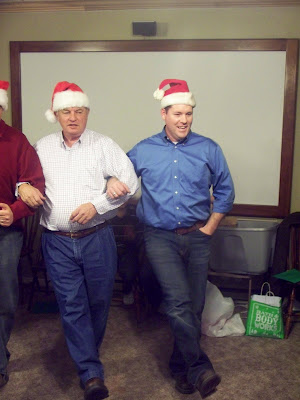 Dad and Craig singing White Christmas (a tradition) but this year a nice kick line was added. 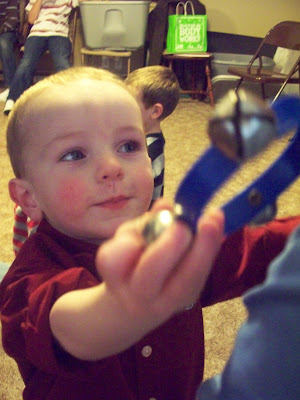 Brit waiting his turn to ring the bells. 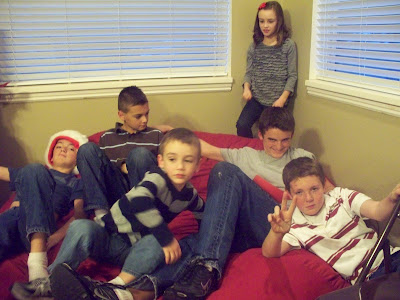 Cousins hanging on the bean bag. I love these kids! 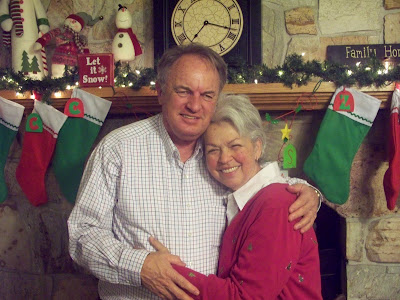 Cute photo of Grammy and Papa! 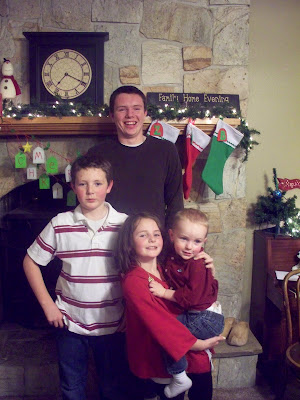 *CHRISTMAS MORNING*
Note to self...Christmas PJ's are a must next year...they make photos so much cuter! 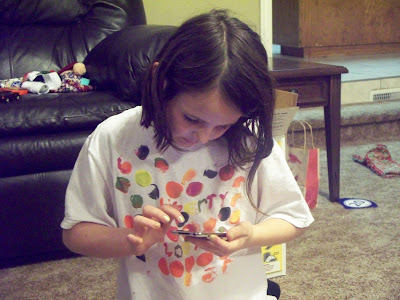 Liberty playing with her new iTouch. She loves it! 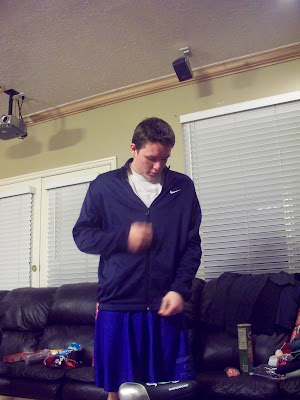 Caleb modeling some of his new clothes. 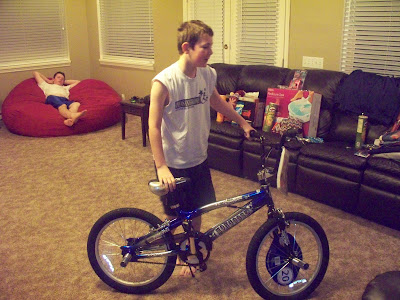 Zach with his new bike. 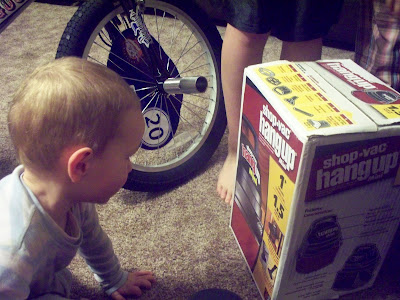 Brit checking out his new Shop Vac (it's a long story, but he LOVES it!) 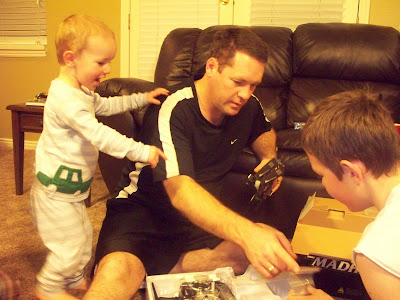 Craig and the boys got remote control helicopters. Of course, one crashed on its first flight. This seems to happen every year, someone ends up crying about a broken toy, but we have been lucky enough to some how fix it or at least order a new part. This year it was Craig's who crashed. He was as sad as any little boy I've ever seen. 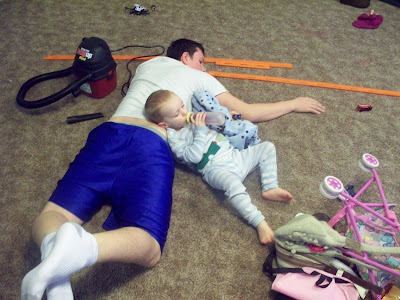 After all gifts were opened, I walked into the family room to see this. Brit loves his big brother.
*CHRISTMAS BRUNCH @ GRANDMA & GRANDPA'S HOUSE* 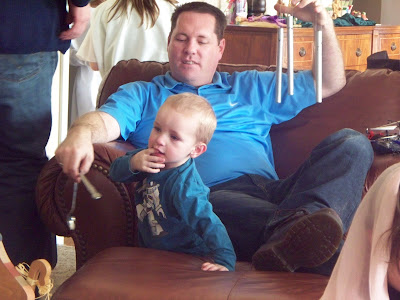 Craig and Brit, hanging out waiting to eat. 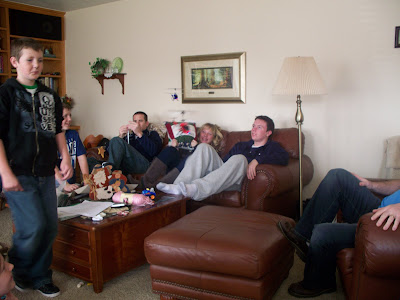 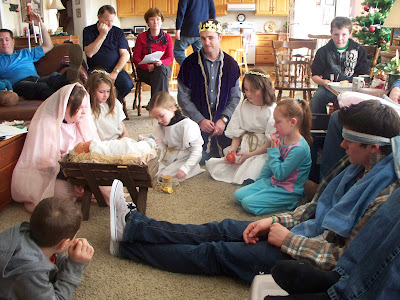 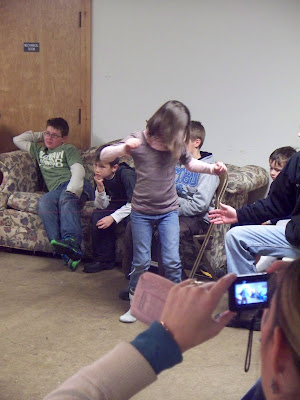 Liberty doing her part in Minute to Win It game. She was part of a human conveyor belt. 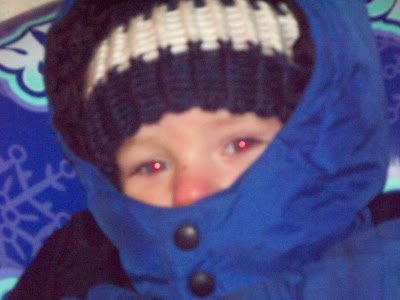 Brit just after his first time sledding, he had to be bundled up because it was COLD, but he is grinning ear to ear. When I opened up his hood, he smiled and said, "Again, Mom!"
Needless to say, he LOVED it!
*CABIN TRIP DECEMBER 28-31 @ FAIRVIEW LAKES* 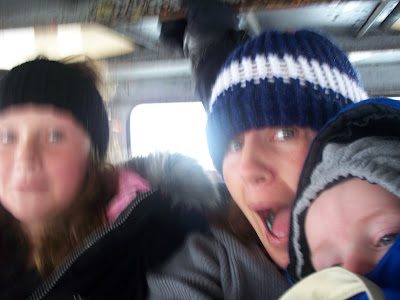 Brooklynn, Brit and I riding in the snow cat to the cabin. 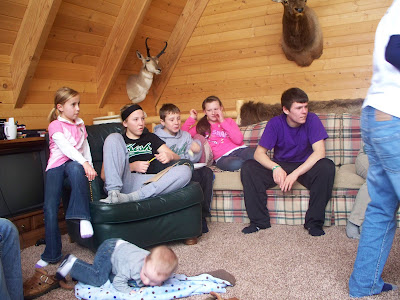 Kids watching one of the many ping pong tourny's that took place. While we were there we got about 3-4 feet of snow. So most of the time there was spent inside the cabin, not snowmobililng. 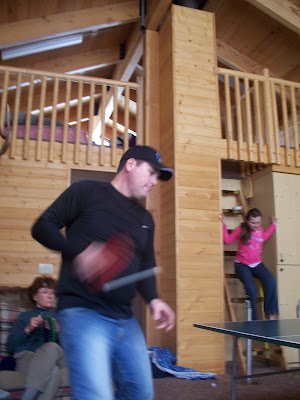 Craig in the middle of one of his games 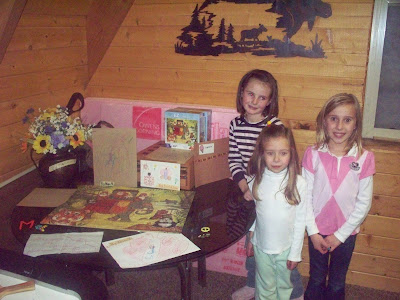 The little girls planned an art show this year. It was a cute idea. 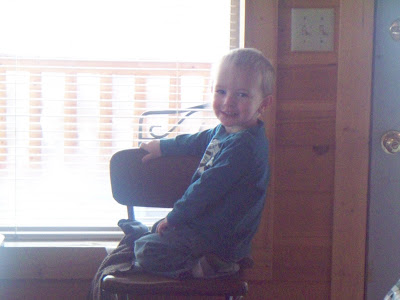 Brit enjoyed sitting by the window watching anyone who was brave enough to venture outside. It was FREEZING! At one point it was -4 degrees. That is without the wind chill. CRAZY COLD! 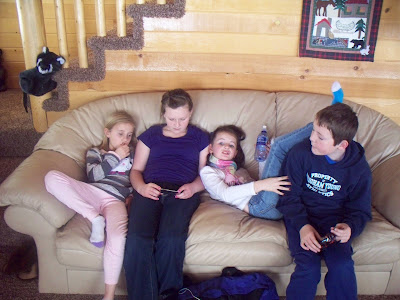 Everyone had a good time, even if we couldn't do what we came to do, snowmobile. The snow put a damper on that idea. The kids dug snow caves and tunnels, jumped off the roof into the snow, played games, painted fingernails, and thank heavens for itouch games, they saved the day! We joked that next year's Christmas cabin trip we need to order much better weather! We will have to see how that goes.
That's some of what we did, we had a great 2 week vacation and I am having a hard time grasping the idea of going back to school in the morning. I guess all good things come to an end.
Happy 2011!

What a fun vacation for your family! Happy 2011!

i love that picture of mom & caleb---i need to be soo much better at pictures!