Okay I got a text from DanaLee on Monday or Tuesday inviting me to her birthday celebration. The info read:
Mama Mia Sing Along
Thursday, Sept. 18 @ 7:20pm
Jordan Commons
Dress in 70's attire

I will admit my first reaction was sounds fun but I don't know. Not that I don't love spending time with Dana, it was just me thinking can I do this with a straight face. Well, Thursday came and I made a stop at DI for some 70's attire. I will admit my options weren't great! I was able to find this lovely number that seemed to fit around my 15 weeks prego belly. I didn't say that it looked lovely I said it would work. I did my best to Farrah-ize my hair, which wasn't a complete success but it will do. I thru on my funky red sandals and large black shades and headed out. I was so worried that I was going to show up first and be standing there wondering what others were going to think of me. I called Dana like 3 times asking her where to meet and where she was parking so I wouldn't have to walk by myself. I know, I promise I am not usually this self-conscious, but put yourself in my shoes...the 70's look (at least not the one I was wearing) isn't quite considered in style! I was able to meet up with her quickly. We went to the theater and there were only about 20-30 people there tops. I had to laugh. I had never seen the movie. Right off the bat, I started to laugh!!! The words poppped up on the screen, words highlighted to know when we were supposed to sing them. All that was missing was the bouncing ball. It took awhile for me and most of the others in the theater to get into it...by the end we were all singing some using very random, off-key voices on purpose, other's bless their hearts! By the end of the movie many folks were in the main isle dancing and singing their hearts out. This was my que to take photos. I didn't want to dance the self-consciousness kicked right back in. It was a lot of fun! I am glad I went not only to spend time with Dana on her b-day but also it was good to get out and let loose! Well sort of! 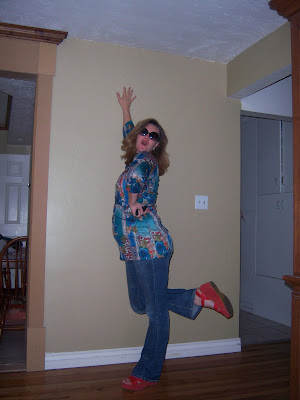 Here I am heading out the door, Liberty snapped this pic for my posterity!!! I don't want to think of what my great-grandchildren are going to think of this. 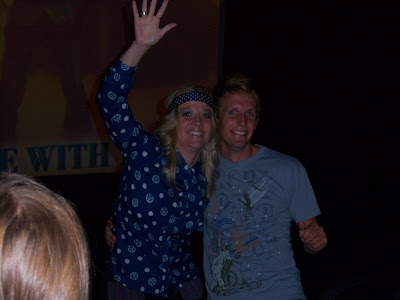 Here is cute Dana dancing with some guy in the theater who found out it was her b-day! Doesn't she looks so cute. I wish you could see the blue eyeshadow...it made the whole outfit complete. So much fun!
I will say on a side note: Peirce Brosnon really shouldn't sing, I think this could ruin his reputation at least in my eyes. I screamed outloud when he started to scream, not because I was excited, more like I was embarassed for him.

Posted by Craig and Cricket at 2:40 PM 3 comments

Okay I was just looking online and found this amazing video clip. It is like 7 minutes long but really amazing.

Watch it and see what you think. It gave me chills.

Posted by Craig and Cricket at 4:06 PM 3 comments 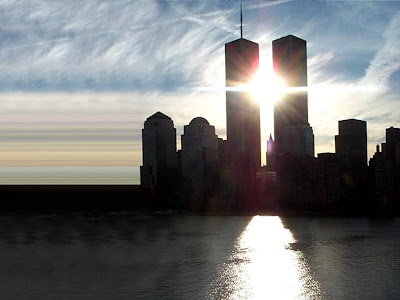 I woke up this morning to a flag waving in my front yard, thanks to Caleb for putting it up very early. I got tears in my eyes because I can so vividly remember what that morning was like for our family. I was sad that at school today nothing was said or even mentioned. I wished I would have planned something incredible in remembrance of this day. Most of the children that I work with weren't even born when the towers fell and the planes crashed. I don't think Zach knows much about it. Liberty wasn't born. Caleb knows, he was young in Kindergarten but I feel like he knows. He showed respect by getting up early and placing the flag out (not only for us but for a few others in the neighborhood), I am so impressed by that. What is amazing to me is that the memories still seems so fresh, I remember the feelings I had, I am amazed at how strong people were and are. Such heroes. 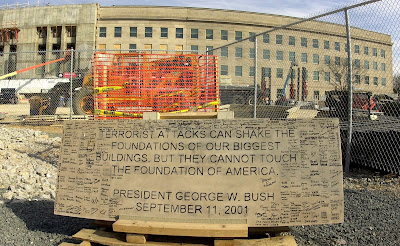 I love the quote on this slab which was place on the Pentagon after rebuilding the section which was hit by the plane. So true!

A flag found in the rubble of World Trade Center. Oh long may she wave!

I will never forget the sorrow and sacrifice of that day. America is strong! God Bless America!

Posted by Craig and Cricket at 3:06 PM 1 comments

Football on the Brain!

Okay I must say that here in our household we are very caught up in Football right now...both boys are playing tackle football, so double the gear, double the practices, double the games and double the talk! Also, this year for the boys birthdays they got BYU season tickets. They love BYU!!! Not a day goes by with out some sort of football talk. Which is fine, Liberty and I have learned to just shake our heads and not ask questions. (Just kidding!!!)

Well, tonight I think takes the cake with the football talk. Craig, Caleb & Liberty had just gotten home from Caleb's game (which they won 35-0!!!) and I stayed home so I could take and pick up Zach from his practice. After showers of course (let me tell you it doesn't matter if the boy is little or big, the stink factor is there!!!) we were kneeling down to say our family prayers and this is how it went....

Craig: "Zach will you say the prayer?"
(at this point the room got quiet and everyone knelt ready for the prayer)

Entire Family: LAUGHTER!!! Everyone in the room just burst out in laughter!

We now know that we are living, breathing, and even praying football! It is surely something we won't forget!!!

Posted by Craig and Cricket at 9:13 PM 3 comments